Trending
You are at:Home»Arts/Entertainment»Movie Review — ’10 Cloverfield Lane’ — The Rare Horror Franchise that Deserves to Go Viral

2008’s Cloverfield was a decent monster flick that suffered from one fatal flaw: it was a found footage film that did not need found footage. Writer Drew Goddard (Cabin in the Woods, Buffy the Vampire Slayer) and director Matt Reeves (Let Me In) had proven they were more than capable of developing characters and building suspense the old fashioned way. The shaky camerawork and gimmicky “realism” just got in the way.

The argument, I suppose, went that massive disasters today are also viral media events. Horror should address the way we view catastrophes in the modern world: at a distance, from low res cellphone footage taken by onlookers. Fair enough. But the movie wasn’t committed to that perspective. We weren’t watching the monster from the camera phones of helpless bystanders on the ground. We were platform jumping across skyscrapers and going on missions like any hundred million dollar blockbuster. In the end, if the film aspired to ape the zeitgeist of genuine viral sensations, it achieved only their less flattering attributes: it lacked substance and faded quickly from memory.

Thankfully Dan Trachtenberg, the director of spiritual sequel 10 Cloverfield Lane, sticks to the basics. This is a classic American-style horror movie. Every shot is touched up for maximum forebode. The score overpowers just about every scene, never allowing the audience to catch their balance (or, in most cases, to think at all). The hundred minutes are liberally interspersed with all types of shocks and twists, warding off boredom wherever it might rear its ugly head. It’s not especially artful, but you gotta admit it’s effective. 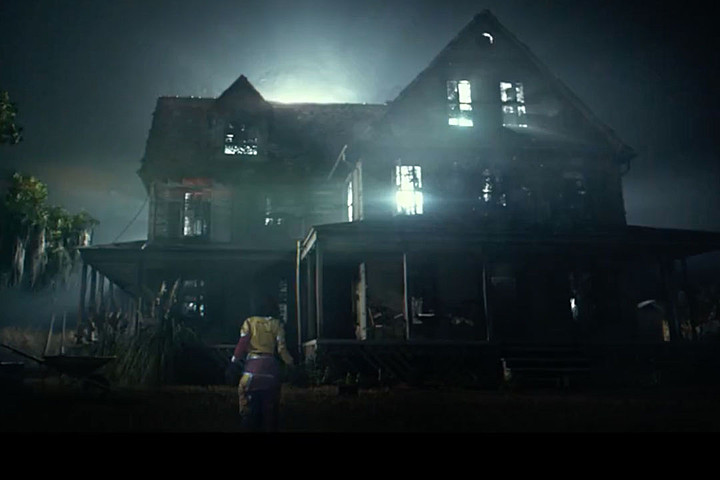 In place of a massive, city-destroying monster, we now have John Goodman. He plays Howard, an eccentric survivalist who, depending on one’s point of view, either rescues or kidnaps two younger adults, Michelle (Mary Elizabeth Winstead) and Emmett (John Gallagher Jr.), in his apocalypse bunker after what he claims was a nuclear attack. Emmett is there by choice. Michelle woke up there after a car accident, handcuffed to a pole with a broken leg and all her belongings stored out of reach.

A harrowing bottle episode ensues, with Howard trying to convince Michelle of his pure intentions (while also refusing to let her go to the bathroom with the door closed), Michelle trying to find a way to escape, and Emmett trying to figure out whose side he’s really on. I’ll admit I often had no idea where the story was headed next. One moment everyone in the bunker is putting puzzles together like a heartwarming adopted family, the next they’re trying to kill each other. You might not think it could escalate from there, but the screenplay (by Josh Campbell, Matthew Stuecken, and Damien Chazelle) keeps finding opportunities.

Winstead has a great presence and I hope her turn here leads to more starring roles, but the whole film is a lob over the plate for Goodman. This is one of the best performances of a career for which that is truly saying something. His Howard is paranoid, obtuse, volatile, and yet never once is he inhuman. Even when we suspect he’s lying, we also suspect he kind of believes himself. “I know I seem like a sensible guy,” he says at one point, after threatening to assault both of his guests and theorizing that nuclear war was caused by Martians. 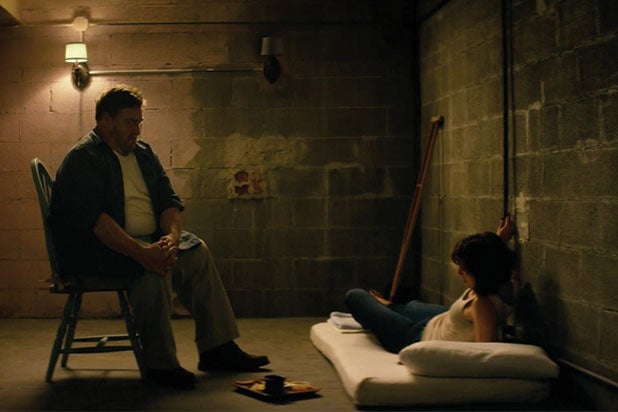 Underneath all of this is a fairly unsubtle allegory. Howard’s humorless moralizing, mistrust of outsiders, and love of walls draw a distinct parallel to certain newsmaking politicians. “Crazy is building your ark after the flood has already started,” he says at one point. If you didn’t catch that, later he adds, “People are strange creatures. You can’t always convince them safety is in their best interest.” More succinctly: “As of Friday, kindness and generosity are antiquated customs.”

His age and portly stature clash with the youth and optimism of the younger inhabitants. Michelle is resourceful. Even down a leg and tied to a pole, she finds a way to defend herself. Even when she’s convinced the world is flooded with radiation poisoning, she’s still looking for ways to get out from the watchful eye of her captor. While Howard is proud that he predicted the end of humanity and found a way to save himself, Michelle is always looking for ways to rejoin the rest of the world at any cost.

Unfortunately, not every moment of the film can pit Winstead against Goodman. John Gallagher Jr. is perfectly fine as Emmett, but his character is underwritten and the movie stumbles when it tries to build chemistry between its two young leads. Moments when Emmett and Michelle wonder aloud about Howard’s true identity are the slow death of the film’s pacing. Their discussion about all the regrets they’ve had during their twenty-odd years of life is way too staged and on-the-nose to work as hangout movie downtime fodder. Furthermore, their plan to escape (involving a teen magazine that just happens to have a “Make Your Own Gas Mask” section) are contrived even for a post-apocalyptic thriller sequel to a science fiction monster movie.

Thankfully the movie doesn’t pause anywhere for too long. Just when a moment threatens to derail momentum, it’s replaced by something really exciting. And actually, it makes me wonder why the studios are so obsessed with found footage horror. I get that it’s cheap and that its mystery can inspire a rabid following, but found footage in essence is a broken genre. When all the characters work, the plot is perfectly paced, and the story makes sense, it actually hurts the illusion of reality on which found footage relies. A great found footage film, like Blair Witch or [REC], almost requires a fortunate accident where flaws become virtues in the service of a more vivid illusion. Filmmakers like Reeves, Goddard, and Trachtenberg are clearly talented, but they might be too professional to take that huge of a risk.

Fortunately, there’s a more consistent, far older method for achieving viral success. This is where I think the Cloverfield franchise (if one can call it that) is probably headed, or at least I hope so. We now have two stories, entirely disconnected except for a shared fascination for gothic, surreal, fantastical storytelling and some hints that they occur in the same universe. Horror pioneer H.P. Lovecraft did the same thing with his short stories a hundred years ago. His Elder tales like Call of Cthulhu and The Dunwhich Horror have inspired generations of horror storytellers (including, I’m certain, producer J.J. Abrams). They hooked audiences desperate for mystery and excitement with tales of isolated human evil and otherworldly terror that all hinted at a larger universe just beyond the horizon.

It’s the same kind of thing Universal has attempted recently by linking all of its monster movies in a Marvel-style shared universe. But the new iterations of Frankenstein and the Wolf Man have failed to inspire a rabid fanbase because the stories themselves don’t excite imaginations. Abrams, inventor of the “mystery box,” knows a lot more about what gets people excited and keeps them awake at night. If indeed the Cloverfield title is not an empty promise of zeitgeist-baiting thrillers, but a concentrated effort to give people true sensationalist fiction, consider me on board. I can’t say I cared about a sequel to Cloverfield, but now that I’ve seen it I definitely want to know what happens next.